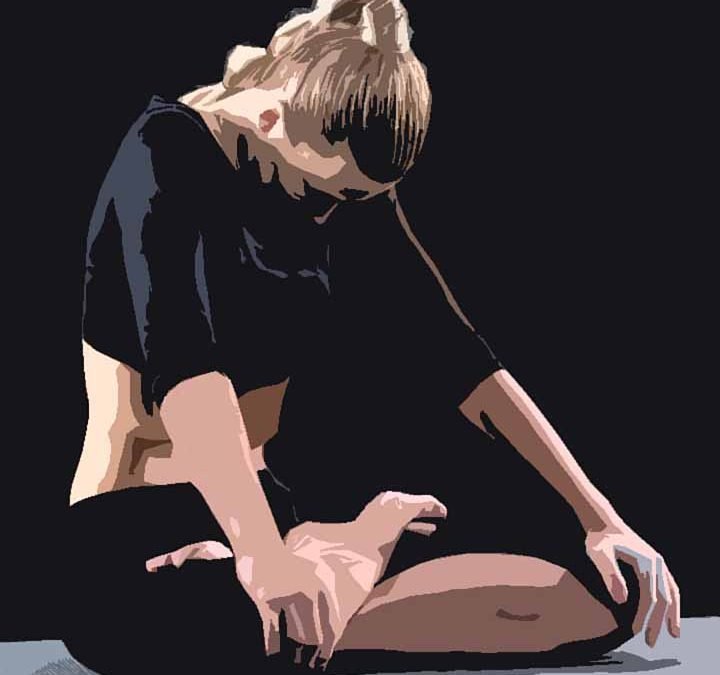 Rudra Granthi is the throat valve preventing the energy from being lost through the vishudhi chakra and redirecting it inward and up. It connects the head with the rest of the body, as the sternal notch and chin appear to move together (connect) hence called the chin lock. This is the seat of verbal (voice vibration) and articulate expression (through the connection via the collarbones, arms, and shoulders, arms, and hands). Vishuddi chakra is the chakra where thought communicates with the rest of the body via speech and action. The Jalandhara bandha connects the energy to the head (ajna chakra) .

To begin one should first make sure that the fascia, muscles and connecting tissues, of the neck and throat are relaxed by elongation and raising up the base of the skull (occiput) as well as the chin simultaneously. This is just a way to be sure that the neck and throat are well lengthened and the joints distracted removing tension in both the front of the throat and the back of the neck. At the same time the base of the skull (occiput) moves back and upwards, creating an opening space. This is enabled through tilts and rotations as the neck settles in its natural ‘S’ curve. A subtle but salient point is in allowing the rotation and spiraling of the back of the skull without allowing the occiput (the cranial base) to move forward. Rather the occiput remains back and upwards. The heart (sternum) expands, the chest feels more open and raises up moving toward the chin. This occurs by allowing the upper ribs to elongate and extend while the center of the sternum opens, thus relaxing and elongating any pre-existing tightness in the shoulder girdle, chest, and neck muscles. Taking a deep breath here while inflating the top ribs adds to the lift. So basically the chest rises to meet the chin, the chin does not need to drop to meet the sternal arch. The key to the physical motion is the tip of the jaw, the chin, which is allowed to relax and drop toward the rising ribs, the top end of the throat below the jaw is sucked upward and backward towards the occiput which is simultaneously raised and moves upwards. The chin does not move down, rather the jaw just drops open. Eventually if all the resisting fascia become released, the chin will rest on the sternal notch by itself while the directive force comes from an opening at the heart, neck, and cranium.In order to prevent the chin from moving away from the sternal notch (as the sternal notch is moving up toward the chin), try to expand your inner awareness to include the back of the neck and occiput. The back of the lower neck is brought further backward and prevented from moving upward while the root of the tongue (near the hyoid at the top of the throat) raises upward away from the sternal notch. A tendency is to rush the bandha by allowing the back of the skull to fall forward, rather let the back of the skull remain behind allowing for its rotation/pivot in the center of the upper soft palate. The occiput remains long from the back of the shoulders throughout (thus preventing the back of the shoulders from rising in relation), while simultaneously the back of the scapula (middle of shoulder blades) rest downward toward the sacrum. The mid scapulae stay down toward the pelvis at all times, but the very front top of the shoulders (attached to the collar bone) should raise (especially for those who are chronically hunched forward). Thus the entire chest to head interconnected fascia and energetic patterns are affected. This will open up the upper back, neck and throat, not close it down or contract it. The top of the upper arms, center of the armpits will raise up and move backwards in a spiral motion as the front of the upper shoulder girdle rises up and around. We do not hunch the back of the shoulders forward to get the chin to rest on the sternum, but rather we hunch up and then sequentially move back (lift) the front of the upper shoulder girdle (upper ribs, upper sternum, collar bone, joints, and humerus). This naturally also increases our capacity to ingest more air as well. Summarising it all, the sternal arch (along with it the front upper shoulder girdle) is brought upward to meet the chin as the chin curves inward and upward, the back of the lower neck moves back while the root of the tongue moves up away from the chin. The jaw is drawn back toward the spine as the top end of the throat below the jaw at the hyoid bone as well as the root of the tongue move backward and upwards towards the occiput which itself moves upward and back. As the root of the tongue (hyoid) raises away from the chin, backwards and upwards, the space above the crown should always be visualized as open, unobstructed, and clear as well. This ensures that the energy from the crown to the heart stays open.

The neck and throat area are normally jammed packed with many vital nerves, veins, arteries, glands, passageways, organs, (such as the thyroid, voice box, trachea, vertebra column, etc.) providing not only nerve signals to and from from the rest of the body, but also oxygen, liquid, and food from the nose and mouth to the lungs and abdomen as well. Specifically the larynx, pharynx, voice box, cervical spinal vertebrae, spinal cord, thyroid, and many other nerves and glands share this small and often busy throat/neck region. It is the task of the yogi not to create tension, blockages, imbalances, stress, or more rigidity, but rather release such, creating space for natural evolutionary and harmonious flow to occur. Here we are creating open space and energy flow. Other wise such activity will further aggravate or interfere with the free flowing energy exchange which characterizes this vital region on a physical level and the mental/emotional energetics on the more subtle energetic levels. Jalandhara bandha insures this energetic harmonious free flow and at the same time prevents its dissipation. See to it that the jaw, cheeks, tongue, throat, are not tense or clenched and all the other subtle joints of the cranium neck, throat and chest can relax through this motion. A buoyant sensitivity should be a positive indicator. When the tension/blockage is released, then the energy is liberated, transmitted, and made available. Energetically the nadis (energy channels) unknot and open allowing for heart consciousness to expand. Here the outward dissipative flow of the throat chakra in terms of misdirected or dammed up energy ceases and re-channeled inwardly. Avoid allowing the chin to drop forward and down or the top of the neck or skull comes forward. Rather keep the top of the neck below the occiput within its natural “S” shaped curve, backward, and elongated, allowing the back of the occiput (above the atlas) to swivel up as the chin moves down (rather than forward). Avoid collapsing the upper thoracic vertebrae, there should be no constrictions/tightness of the throat as well as the breath.

Jalandhara bandha tonifies the throat chakra, neck, shoulder and arm regions. Jalandhara bandha is a great aid in pranayama which in turn is a great boost to pratyhara and meditation practice.It can release and tone all the fascia running through the neck, chest and head including the scalene muscle (running from the back of the cervical vertebrae to the front of the top two ribs) as well as the sterno-cleido-mastoid (SCM), upper trapezius muscles, the pectoral muscles, teres, and others. It can correct TMJ (Temporomandibular Joint disorder) and flat neck problems when performed with sensitivity and awareness. Jalandhara bandha helps pump the energy through the throat chakra into the crown and keeps the energy that has risen to the crown, third eye, and talu chakras from sinking down, leaking, or being dissipated, so it may continue to circulate in the chakra system. Like most bandhas it accomplishes pratyhara (here at throat chakra) cleansing the corrupted energy in the throat area and arms and integrating it by bringing it back into the central channel.It relieves pressure at the cervical spine and relaxes tension at the throat region. In yoga therapy it is specifically recommended in treating cases of high blood pressure. It aligns the cranial bones by adjusting the sphenoid bone (which rests on the cranial base inside the occiput. It frees the atlas/axis alignment and movement. It affects thyroid function and enhances the voice. It helps open the chest and heart and relaxes the shoulders. Thus it is beneficial to any adverse conditions that effect the upper torso, neck, and head. It counteracts tendencies toward arrogance, snottiness, aversion, and other such affectations of pride and ignorance.It lifts the heart and brings forth divine will, its expression, and hence moral courage is one effect.

It keeps physical and pranic circulation open between expressive/manifestation center (throat and heart) as well as between the ajna chakra (third eye) and throat, hence it is the connection between heart and mind – body and soul. As the connector between the head and heart, practice can be expedited by understanding the function of kurma nadi and the akasha (ether). Jalandhara bandha not only opens and activates the vishuddha chakra which is associated with the expression of Divine will and hence moral courage, while completing the conjunction of anahata chakra (heart) and ajna chakra (third eye) fully activating the ajna opening, but also unties the knot at the Rudra Granthi thus providing the gateway into the formless Rudra Loka (realm of Siva/Maheshvara) or Dharmakaya (the primordial formless Buddha) hooking the energy through the last great granthi (knot) into the crown center (sahasrara). It also allows the bindu (neuro-endocrine substances at the brain) to melt down through the throat to the heart and rest of the body. However Jalandhara is associated specifically with opening the Rudra Loka at the third eye (ajna chakra) as it frees the energy blockages at the throat allowing it to enter talu chakra (in the back brain) and ajna chakra and upward through the upper Brahmarandhra (hole at crown of the head) where Shiva resides.A natural expression of this bandha is mouna (silence), fasting, a quiescence of the monkey-mind chattering – a quiescence, fulfillment, and the activation of moral courage devoid of blame or hatred.Connecting the heartmind it balances the autonomic and central nervous systems allowing body/mind harmony to flow freely in all directions. Thus the tensions between the body and the mind are ameliorated. Because of the chronic dysfunctional nature of the separation between head and heart a preexisting chronic tension is slowly remediated (it can not be successfully rushed or forced) through the efficacy of a practice that creates increased energy flow synchronizing the respiration and sinus heart rhythms, while neuro-muscularly lifting the heart forward as the upper chest moves upward. Like all bandhas it reestablishes inward flow through the subtle, but causal energy body.