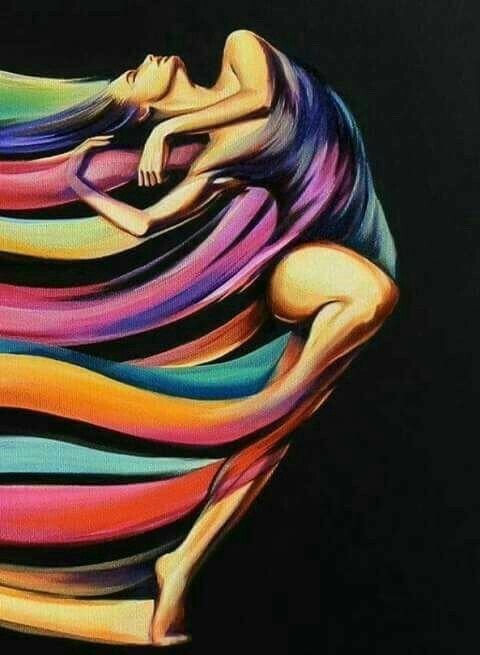 ‘The ‘knot’ is the link between the Self and the body, Awareness of the body arises because of this link. The body is matter, the Self is consciousness. The link between the two is inferred through the intellect. It is by the diffused light of consciousness that the body functions. Since there is no awareness of the world in sleep, swoon, and so on, the location of the Self is to be inferred. Just as the unseen current passes through the visible wires, the flame of consciousness flows through the various channels of the body. The flame of consciousness, taking hold of a centre, lights up the entire body just as the sun illuminates the whole world. It is because of the spreading of consciousness that one becomes aware of the body. The sages say that the centre of radiation is the Heart. The flow of consciousness is inferred from play of forces in the channels. The forces course through the body, each hugging a particular channel. The channel through which consciousness flows, is termed ‘susumma’. It is also called ‘atma nadi’, ‘para nadi’ and ‘amrita nadi’. Because consciousness pervades the entire body, one gets attached to the body, regards the body as the Self, and views the world as apart from oneself. When the discriminating one becomes detached and, giving up the idea that one is the body single-mindedly enquires, the churning of the channels takes place. On such churning of the channels, the self gets separated from them and shines forth by clinging to the supreme channel. When consciousness stays in the supreme channel only, then ‘Self alone shines’. Even though the objects are near they are not seen as separate. He is aware of the Self as clearly, as the ignorant one of his body. The one to whom the Self alone shines, within, without and everywhere, as name and form would for the ignorant, has cut the knot.

The knot is two-fold, one of the channels, and other of mental attachment. The perceiver, though subtle, sees the entire gross world through the channels. When the mind is withdrawn from other channels and is in the supreme channel alone, then the link with the body is cut and one abides as the Self. The body of one who abides in the Self through self-enquiry is resplendent just as a heated iron-ball appears as a ball of fire. The latent tendencies of the past pertaining to the body-mind complex are destroyed. There is no sense of doership because there is no body consciousness. It is said that the karma of such a one is destroyed due to the absence of the sense of doership. No doubts arise since the Self only exists for him. The one whose knot is cut, can never again become bound.

This state is one of supreme power and peace.
– Ramana Maharishi

Who do You think You are?